Animal can search for food by exploiting chemical cues, such as odor and taste. Particualrly, low concentration of salt is a favorable stimulus to many animal, including mammal. Since people started to study chemotaxis using C. elegans, low concentration of salt has been considered attractive cue to C. elegans for many years. However, our investigation on the relationship between salt chemotaxis and cultural environment revealed that worms are attracted to the salt concentration at which they have been fed, while avoiding it if they have been starved. This indicates that salt chemotaxis of C. elegans is a learned behavior, which is acquired by experience.(Fig.1)

In this learning behavior, C. elegans seems tomemorize the association betweem the food availability and environmental salt concentration. Also, they can adjust their memory according to the change of cultural envirionment, within about an hour.

Several experiments, e.g. ablation of neurons, showed that this learning behavior is regulated by stimulation input to a single gustatory neuron, ASER.(Fig. 2) In addition, it is elucidated that diacylglycerol(DAG) pathway in ASER regulates the preference of salt concentration in C. elegans.

Moreover, by the experiment of artificial activation of neurons, calcium imaging and optgenetics, it became clear that neurotransmission plasticity of interneuron, which is downstream of the gustatory neuron ASER, is one of the causes of the behavioral change.(Fig. 3) 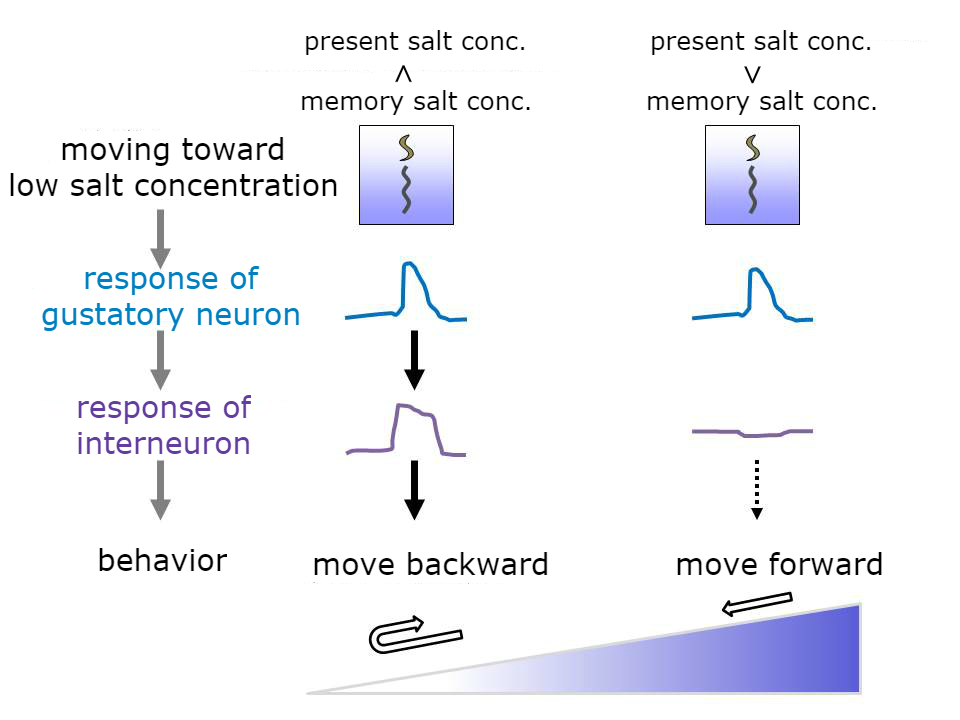 In higher animals, complex brain functions cause memory-dependent behaviors. Where is the memory stored in the brain as a change of molecules, and how do they regulate the memory-dependent behaviors? C. elegans is suitable for the study of common molecular mechanisms of learnng and memory. Also, it is known that the nematodes are harmful to crops. The study of chemotaxis mechanism of C. elegans may contribute to a technological development to reduce the damage by nematodes.